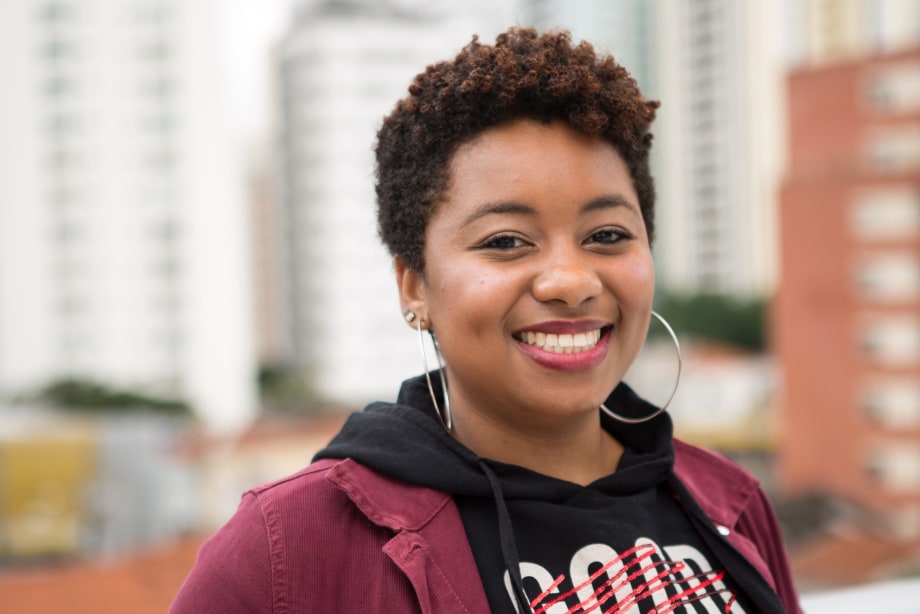 For years, Liliane felt like she didn’t fit in:

She didn’t fit in at the repair shop where, after six months of work, the owner told her she should be reallocated to the administration team because he didn’t want a woman working in the garage, despite her certified knowledge in mechanic automation.

She also didn’t fit in in engineering schools at two different universities. “I was accepted in three federal universities, but people didn’t accept me, because I’m black. I don’t see myself as an intelligent person, but as hardworking. People didn’t understand that I’m smart because I study a lot, and they bullied me. I used to think I’d never achieve anything, because I’m black”.

Seeking a path to a technology career

Liliane finally found her calling in the technology field, where she experienced a diverse and inclusive environment.

She began a course on computer networks, but felt like there was something missing. She kept searching other areas of study, mainly in web programming — but nothing felt like the solution. Finally, she found information about Generation Taster Day and thought “This seems like the right path to reach my goals. Do I fit in here?”

In Generation Brazil’s Java Junior Developer bootcamp, Liliane found a safe place to be herself, share her point of view, and learn. And mentoring was a key part of the journey. “The Generation instructors and staff identified my strengths and a true potential in me. They saw something in me that I couldn’t see. Mentoring is important, because you have someone by your side recognizing your potential and seeing who you really are, saying ‘you are on the right track, keep going’”.

Seeking a path to a technology career

“My life was totally unstructured, I didn’t have hope, didn’t trust people before my experience with Generation. Now I see Generation as a family. It doesn’t matter what happens. We will always have Generation to rely on. I feel grateful.”

Liliane came from a poor family. Her parents were not able to finish school when they were young because they needed to work to support the family. They finished studies years later. Her mother is one of her greatest inspirations, from whom she learned to never give up. Several years ago, her mother finished a graduation course and is now a school teacher.

In the Generation program, Liliane finally found her place and graduated with a certification that led to four job offers in a week. “Years from now, I want to come back and say to Generation classes: ‘I was in the first class, we worked hard, but we succeeded. And so will you. This program will change your life for the better”.

Generation USA – Working as a CNA

Six lessons for getting work training and employment right